A high-pressure thread compound that conforms to or exceeds the requirements of API RP5A3 (former API BUL 5A2) and ISO 13678 Annex A. API-MODIFIED is available as a Lithium based thread compound or Calcium based compound. API-MODIFIED contains rust and oxidation inhibitors blended with Jet-Lube's base grease compounded from custom-refined, low-sulfur oil to ensure brushability over a wide temperature range. It tenaciously adheres to all surfaces, resists water washout, and prevents rust and corrosion. API-MODIFIED reduces friction in the makeup of casing and tubing, preventing galling and wear. Maximum thread engagement is ensured, providing optimum leak resistance. API-MODIFIED contains inhibitors that provide maximum protection against rust and corrosion of threaded surfaces. Its conductivity reduces the possibility of electrolytic corrosion by preventing the formation of galvanic cells in the presence of salt water and other corrosive fluids.

For API 6A bolting and other flange bolting applications although API MODIFIED was used as the reference compound to establish some of the listed make-up torques, Jet-Lube recommends using 550 EXTREME or KOPR-KOTE for reasons of occupational health. Where the torques are provided multiply the value by 1.15 to generate the new torques needed to achieve the same loads as with API-MODIFIED.


APPLICATIONS - API-MODIFIED is specially formulated for use on API casing, tubing connections (i.e. buttress & 8-Round), line pipe, flow lines, subsurface production tools, tank batteries, and will lubricate, seal and protect threaded connections of oilfield tubular goods on makeup, in service, and in storage. It is also approved for most proprietary mechanical seal connection designs.
- Not recommended for rotary shouldered connections. 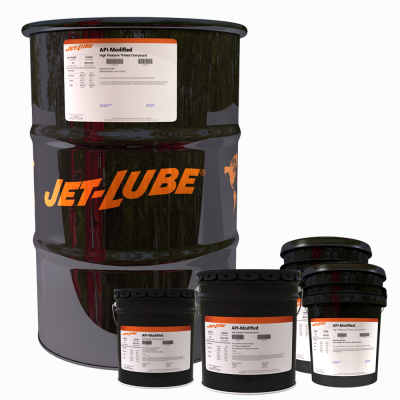